Independence Day is this week in the United States.  It’s a time when we celebrate freedom to live the lives we want, which certainly includes the ability to pursue our dreams.  July 4th is also a special day for my family.  My dad was born on the 4th, and this year he celebrates his 70th birthday.  In his honor, I’ve decided to share one of his favorite weekly stories with you, which happens to be one of my favorites too…

Harry stood out from the other kids.  He had more street smarts than book smarts, but perhaps that’s what growing up poor produces.  Harry’s grandfather was in the garbage removal business and many people looked down on him for it.  Even Harry’s own father didn’t want anything to do with it.  Harry was different.  He liked everything about big trucks, and he didn’t mind getting dirty.

Very few people aspire to become garbage men, and so Harry tried college first.  To help pay for school, he pumped gas at a local station and drove a dump truck part time.  But he soon decided that he wasn’t cut out for college.  At the beginning of his sophomore year, Harry decided to drop out.  He joined the Army, but after a few years, he still felt lost.  It was time for him to pursue his passion, no matter what others thought about him. 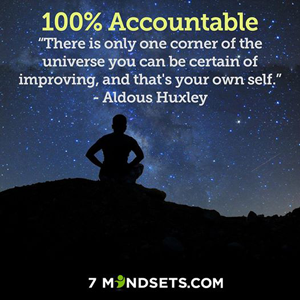 At the age of 25, Harry began working in garbage removal in South Florida, a region that was experiencing significant growth.  Harry had recently gotten married and didn’t have much money left, but he saw an opportunity, and wanted to go into business for himself.  He approached the owner of the garbage company and asked if he could buy just one garbage truck and a small collection route.  The owner agreed to sell him one of the oldest trucks in the fleet and a route in a lower income part of town.  Harry was able to borrow $5,000 from his father-in-law to make the deal, and, suddenly, he had become his own boss.

One of his high school friends saw Harry driving the garbage truck, and thought that he must’ve hit rock bottom.  Harry would drive the truck from 2:30 in the morning until noon picking up garbage.  Then he spent the afternoons knocking on doors trying to get new customers to sign up for his route.  His hard work paid off.  Little by little, he would add customers until there were enough to buy another used truck and hire another driver.  Within a few years, Harry had accumulated over 40 trucks, and merged his business with another garbage removal company in Chicago.

Then he had an even bigger idea.  He decided to buy smaller garbage companies all over the United States and join them into one big company.  Over the span of twelve years, he acquired over 150 garbage companies, and by the time he was 37, Harry Wayne Huizenga (pronounced High-zinga) was a multi-millionaire.  His company, Waste Management, Inc., was the largest garbage removal business on the planet, and its stock was being traded on the New York Stock Exchange.

A dozen years later, Wayne (he prefers to be called by his middle name) ventured into a new business but used the same strategy.  He bought a small video rental chain for $7 million, then began acquiring hundreds of mom and pop video stores.  In less than 10 years, Wayne owned over 3,700 stores and his company, Blockbuster Video, was valued at over $4 billion.  Blockbuster was the second company Wayne took to the New York Stock Exchange, and he later sold Blockbuster for over $8 billion.

When I met Wayne, he told me about his latest venture, the first national chain of car dealerships that he’d named AutoNation.  He eventually grew AutoNation to 370 stores, and it became the first car dealership to go public on the New York Stock Exchange.  Wayne also has the distinction of having owned three professional sports teams:  football’s Miami Dolphins, baseball’s Florida Marlins, and hockey’s Florida Panthers.  A friend of ours joked that Wayne did pretty well for himself, especially for a garbage man.

They say that one man’s trash is another man’s treasure, and there was never a truer example than Wayne’s story of turning actual trash into a fortune.  How often do we let outside opinions get in the way of our dreams?  It’s time to embrace the 100% Accountable mindset and stop getting bogged down by other people’s ideas of what you can or should do.  Clear away the refuse, find what you love, and pursue it with everything you’ve got.

Live Your Dreams
Posted by Scott Shickler at 3:41 PM